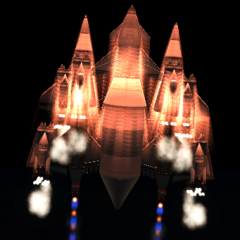 Do you SSTO anymore?

So, in adpating to the recent changes, I've given up trying to SSTO everything.

When trying to SSTO everything, I'd use big launchers to minimize the number of launches and re-entries I'd have to do...

As a result, my launch masses are often around 400 tons (and when actually near the payload mass limit, I'm getting >35% payload fractions)

The recent reduction to jet thrust makes the liftoff quite awkward. I also find that having to set a positive pitch angle with lower rear landing gear than front landing gear increases the risk of long payloads striking the ground.

The short burn time of the kickback SRBs + the increased physics draw distance means I can jettison them after burnout, and have them safely land on the runway

- full recovery cost for the decoupler parachute, and SRB itself - the only cost is the solid fuel, which amounts to 84 credits per kickback.

As a result, I'm now doing a lot of designs which stage while still over the runway.

8 kickback SRBs to help lift the nose, and then accelerate and climb above the runway really helps to get a 400 ton behemoth into the air.

Its equivalent to the thrust of >12 extra rapiers, or 10 extra turboramjets, and extra 3.26 m/s/s of acceleration (for a 400 ton spaceplane) on takeoff

Considering the SSTO normally recovers with remaining fuel for >350k, and that fuel costs are about 15k for large payloads, its not much...

Is anyone else finding ways to make use of the longer draw distances to recover booster stages?

I can't manage anything like what spaceX wants to do due to physics limitations... but I find the short burntime of kickbacks to be perfect for 1st stage recovery.

Im also starting to try it out with vertically launched rockets, and I want to try out some RT-10s instead of RT-5s. Anyone tried this?

I'm worried their burn time is too long and they'll still be under parachutes when they get 22.5 km away, and they'll thus despawn.

I'd still like to have another stage, that I decouple on a suborbital trajectory, get the payload to orbit, and then switch back to the suborbital stage... but it will land so far away, recovery losses likely won't make up for the reduced fuel costs

(What I wouldn't give to be able to decouple a rocket from a plane at 30km going ~1,300 m/s surface velocity, and then be able to turn the plane around and land... or to make a 2nd space center to the east where craft could be landed for a higher recovery value)

55 answers to this question