Supersonic plane challenge RESULTS ARE OUT! 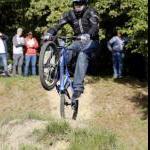 By DualDesertEagle,
May 31, 2016 in Challenges & Mission ideas