Is there a way to hide specific craft in map mode? 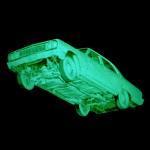 Let's imagine a situation where you have lots of things orbiting around Minmus. Everything is in roughly the same orbital radius. Is there a way (mod?) to somehow hide specific vessels or stations vs. all of a certain type from the tracking station?