TWR in a winged vessel..

There's been a lot written on this board about optimal TWR for rockets.  Math got involved,  some of which went over my head,  but the consensus seemed to be that 2 was a good number.

What I'd like to know is if the same Math can be used to prove the "best" TWR for a spaceplane in closed cycle mode.

Now before everyone heads for the hills,  try not get too freaked out by the fact it has wings.

Wings generate lift, in exchange for creating a bit of extra drag and extra mass.    If you angle the wings up at 5 degrees relative to the fuselage, tweak the tailplane/canard so the plane holds a nose angle between half a degree and one degree nose up when  SAS is set to prograde,  your lift/drag ratio is going to be more or less constant throughout the closed cycle part of your flight.

Another way to look at it, is that since we have wings, and wings are counteracting gravity, we only have to be concerned with drag.

Of course, this comparison is only valid if the airplane is generating enough lift to support itself  while building velocity.   You could set the wings at a lower angle, or zoom climb to a high altitude on jet power before going closed cycle,  and temporarily get lower drag, but it won't be sustainable as you'll soon fall back into thicker atmosphere and be worse off.      That is why it is best to chase optimal "lift:drag" ratio rather than absolute lowest possible drag.

Let's say it weighs 30 tons.  In Kerbin gravity, that works out to a gravity force of 300kn if you round things up  a bit.

Do we need 300kn lift ?  Well, not quite.     Let's say we're going at 1400 m/s -  that's actually two thirds of orbital velocity, meaning that orbital freefall is already going to be cancelling most of gravity.    We only need to get enough lift to make up the difference, and stop the airplane descending.    As our velocity continues to increase, our apparent weight decreases.   Since we're holding a constant AoA at constant lift/drag,   our lift now exceeds weight,  and we drift upwards, until the thinner air causes lift to no longer exceed weight.   At this new higher altitude however, drag is less, and so on.   As you can see,   this means it gets easier and easier to accelerate as time goes on,   and fuel burnoff is not the only factor at play.

At this point , some of you will be saying "so what" because,  with RAPIERs in closed cycle mode,  your TWR on this phase of flight is going to be so high as to make  such optimisations pretty irrelevant.

Stock, you can get 1600 m/s air breathing,  and so theoretically only need 600 m/s delta V in closed cycle mode to make orbit.

With the rescaled system,  even if you manage 1600 m/s air breathing, you need another 2600 delta V to make orbit - more than four times as much.        I don't think there's any chance of packing enough fuel in to do that with a 305m/s specific impulse RAPIER -  800 m/s NERVs are probably your only option.      However, they have much worse TWR -  3 tons for 60kn, instead of 180kn for 2 tons.     Pure chemical rocket engines are better still - the Dart manages RAPIER thrust levels for just one ton,  and is far from the highest TWR engine available.

Compounding the issue,   at the start of your closed cycle burn,  you are nowhere near orbital velocity on rescaled Kerbin, thus are still feeling the full effects of gravity.  This holds you deeper in the atmosphere,  with greater drag losses, for longer.

Thus,  this "optimal" spaceplane TWR becomes such a vexed question. 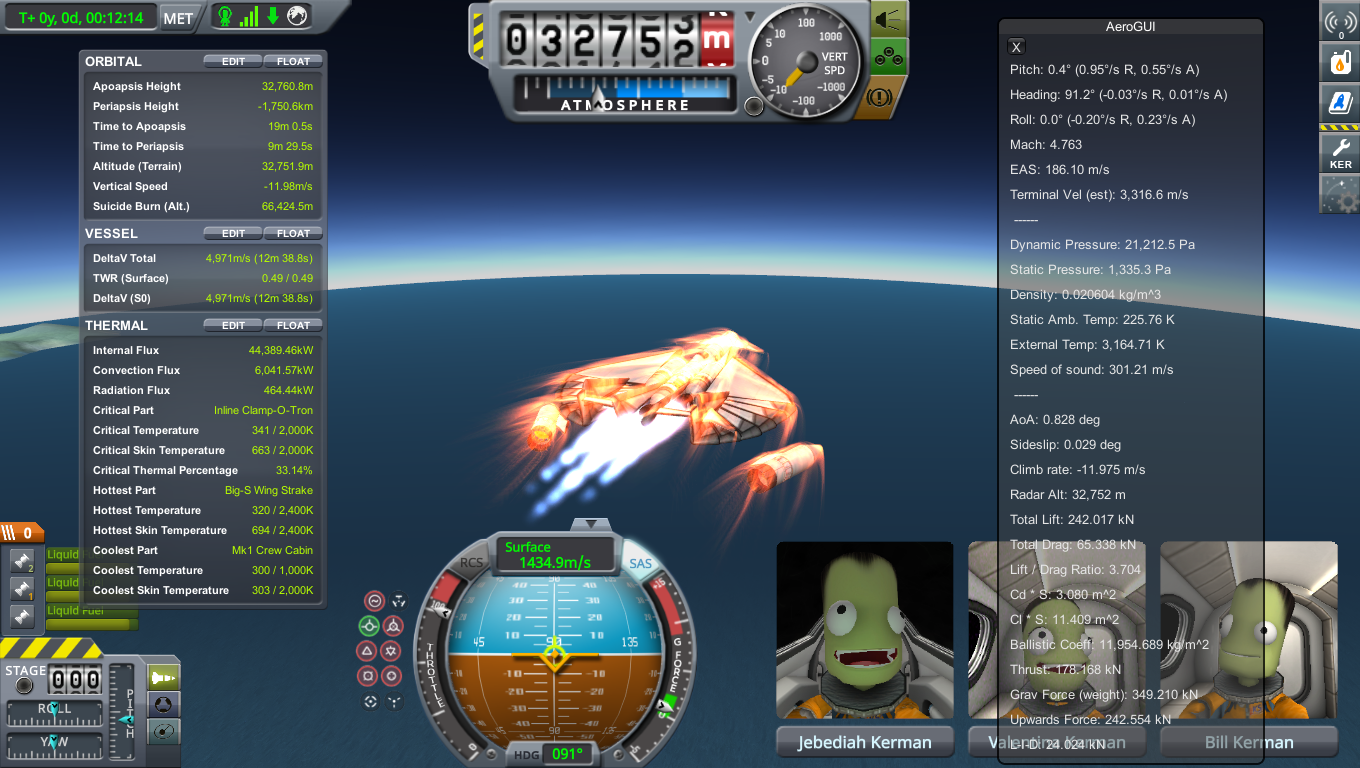 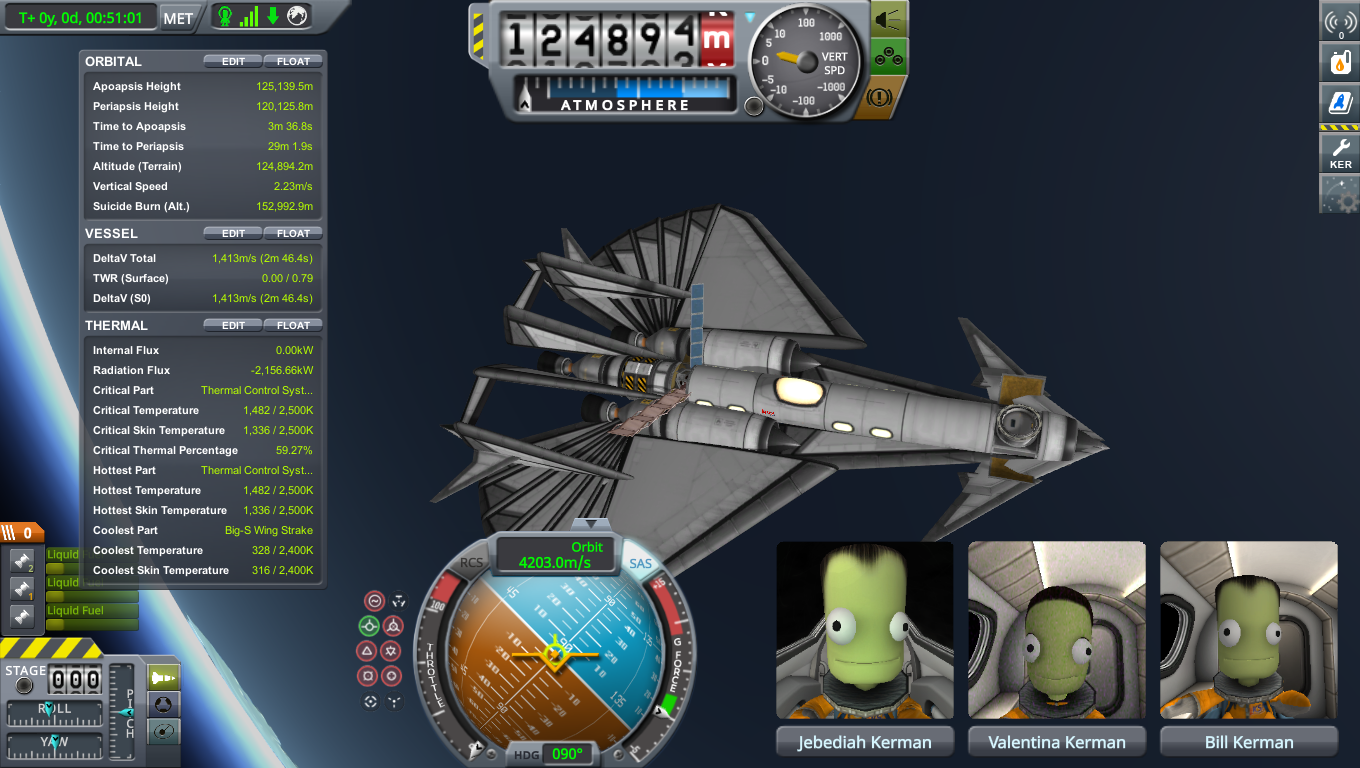 I can SSTO with the rescaled Kerbin but such a craft ends up with little fuel left over in a very low orbit.      So the Starion 2 was a mod of the original SSTO that dumps its jet engines at flameout to get extra delta V.        Two whiplashes, three nervs.

Why Whiplashes instead of RAPIERs?    Cost.        Whiplashes fade pretty badly after 1100 m/s , and you can expect another 300 m/s top speed with RAPIERs in air breathing mode, but Whiplash are only 2200 Kredits vs 6000 for the Rapier,  and can lift more payload due to better low speed performance.    I did contemplate carrying a single RAPIER to orbit,  and use two droppable Panthers to boost us to mach 2.8,  where the single RAPIER gets ramjet-happy and will boost us to a top speed 300 m/s or so higher than the pair of whiplashes would have managed.  But that only takes 10% or so off our closed cycle burn requirement to get to orbit , hardly worth the mass penalty this RAPIER would bring.   And dumping it is uneconomic !

Mass breakdown  of the upper stage

I took some screenies on the way up.   Due to the AeroData GUI being open,  they give some insight into how drag losses changed as the flight progressed :