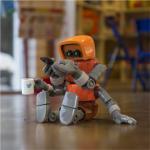 To heavy for liftoff

By BaelRathLian, December 25, 2017 in Add-on Discussions