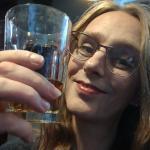 I am playing around with a 2.7 ton SSTO in sand box.

The craft is 3 Oscars, a Spark, a basic solar panel, an octo2, a small inline reaction wheel and a small nose cone it has 3594 m/s dV which I'm sure I can get into orbit.

I have comnet turned off, which means that require signal for probe control is off and no need for extra ground stations.  yet I'm still losing control of the probe at 70km up.

I've even tried with comnet on and extra ground stations enabled.  I thought the octo2 would have enough internal antenna to cope with LKO?

What settings do I use to completely ignore the need for antena?