Dawn of the Space Age 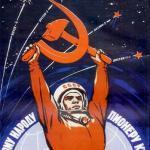