Inverse kinematics robotcontroller for Canadarm1, Canadarm2 and ANY 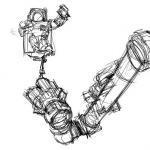