I'm running 1.3.1 RO(RSS/RP-1/Principia).  I've launched to orbit several times in previous careers with manual or partially manual control.  My current vessel is this one: 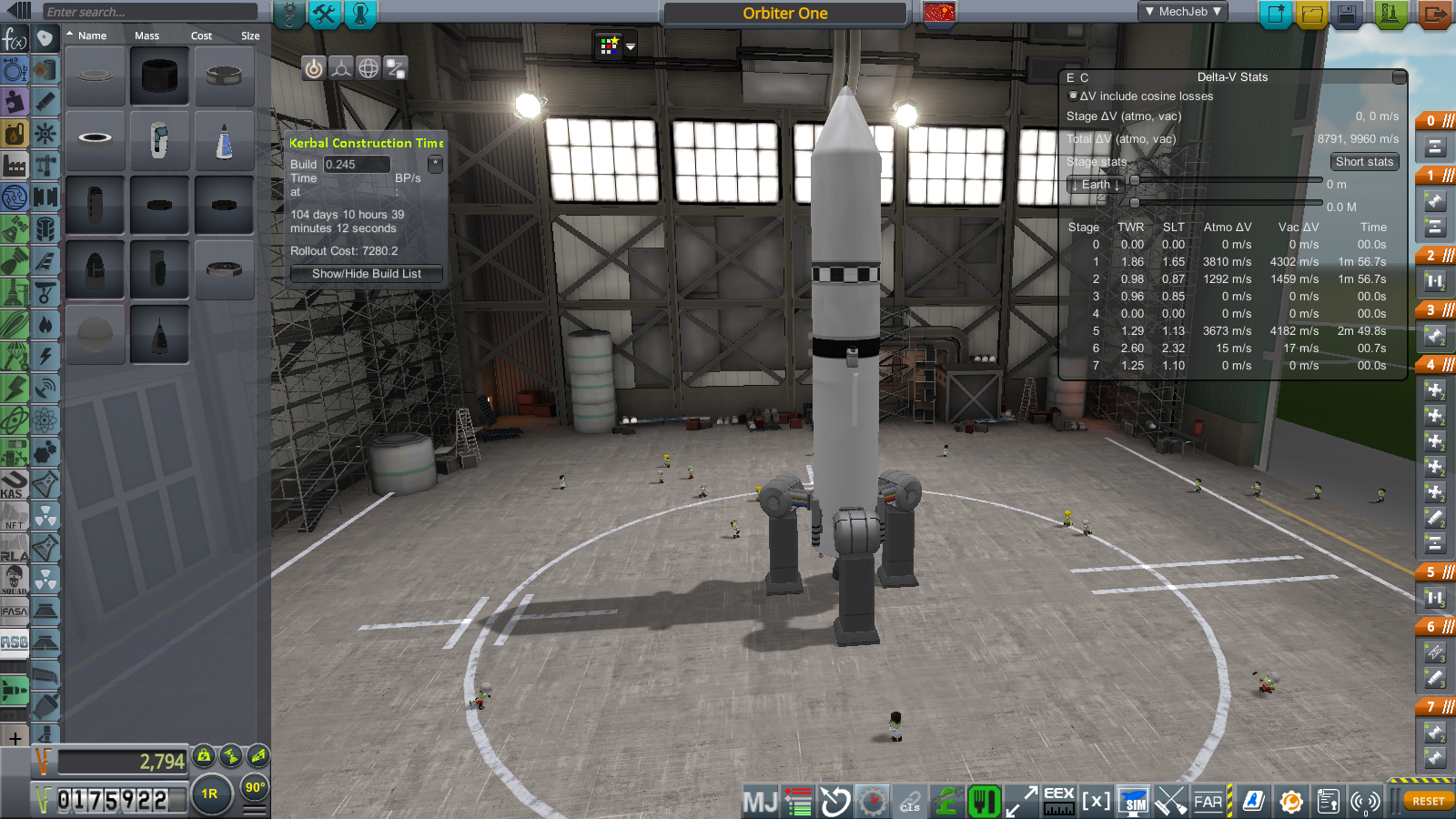 This is a single LR-79 with dual LR-105 verniers, and (currently, upgraded since the photo) six Tiny Tim boosters to give a thrust aid while clearing the launch clamps.  Upper stages don't matter for this, I don't think, but second stage is two AJ10-37 with nitrous oxide RCS, and inside the fairing is a single AJ10-37, also with nitrous oxide RCS, pushing a Sputnik PS-1 with four Sputnik antennae plus Geiger-Mueller counter and four tiny solar panels.  Even with the low SLT, there ought to be (and according to MechJeb on the pad, is) plenty of dV to make LEO -- but that's not the problem.

When I launch, MechJeb correctly auto-stages the launch clamps (once I figured out that the Clamp Autostage field isn't percent, it's a fraction, so .95 means 95% thrust, not just under 1%), ignites the boosters, and then stages them away after they burn out -- but doesn't start its own timer that should initiate the pitch program to start the gravity turn after (zero, ten, or fifteen) seconds from clamp release.  Instead of counting down, the status displays "Vertical Ascent 10.0 s" (or whatever value I've input) for a minute or more as the rocket ascends vertically, until I revert the launch (I'm testing this in sandbox, after noticing the problem in my career at the cost of a launch vehicle and several simulations -- no reverts there).  Reinitializing stage analysis changes nothing. 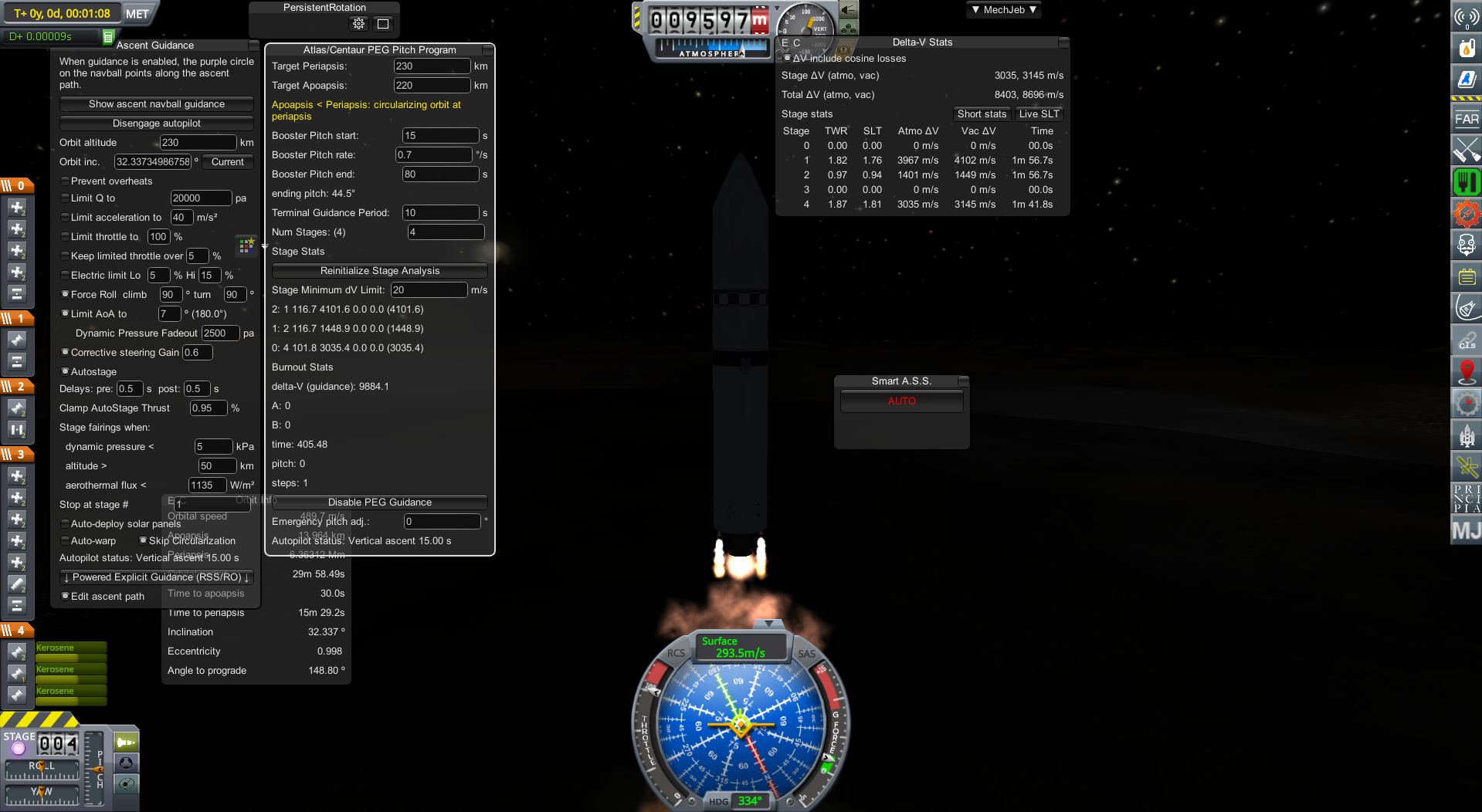 The last time MechJeb actually did initiate the pitch program, pitch failed to follow the velocity vector closely enough after transition to PEG and the vessel broke up due to aero forces when it reached ~12 degrees AOA at around Mach 1.5 at around 14 km.  Since that launch, after reducing the amount of permitted AOA to 7 degrees, MechJeb hasn't even started the pitch program.  Restoring the default 10 degree value changes nothing.

My install was done based on @Bornholio's Golden Spreadsheet, so far as CKAN would let me follow it (at one point, CKAN installed a bunch of dependencies much earlier than they appear on the sheet)and everything else seems fine within the limits of performance of my computer (4 GHz isn't as fast as it seemed it was going to be, by the time you add FAR, E.V.E., and so forth), though I'll note that I haven't been happy with MechJeb operation at any time since installing, and had previously chalked it up to my own inexperience (until installing this RO/RSS/RP-1/Principia game, I'd run stock with only Better Burn Time).  Even now, given I haven't done anything beyond LEO and then with satellites that had little or no ability to maneuver and/or ran out of battery in a few orbits, I haven't had any need for MechJeb other than to try to launch into a specific inclination or altitude -- I can manually pilot into orbit about three times in four with as little as 9500 m/s on the pad, so when MechJeb misbehaved, I assumed I'd set something wrong, reverted, and relaunched on manual.