Warp and automation with ionic propulsion 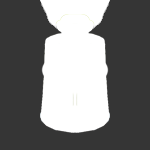