What is Your Favorite Movie? (Oldies Included) 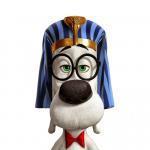