My standard launch profile is to tip over a few degrees when I hit 30m/s, and then follow prograde until the Ap hits 80km.  However deciding what the initial angle should be is something I've never quite got a handle on, and will presumably be a function of TWR and drag.

However most guides recommend using the throttle to change the trajectory and try and keep the Ap a set time ahead of the ship.

As I'm using kOS my launches are easily repeatable so I thought I'd have a play.

This is all with the same ship, an early game 3 stage craft intended for a Mun flyby that is just starting to use it's 3rd stage as it circularises.

I ran a range of turn angles and noted how much dV was left once it has circularised at 80km, then tried the same thing but controlling the throttle so it stayed a set time behind the Ap until the ship reached 40km, where it put the throttle to full until the Ap hit 80km. 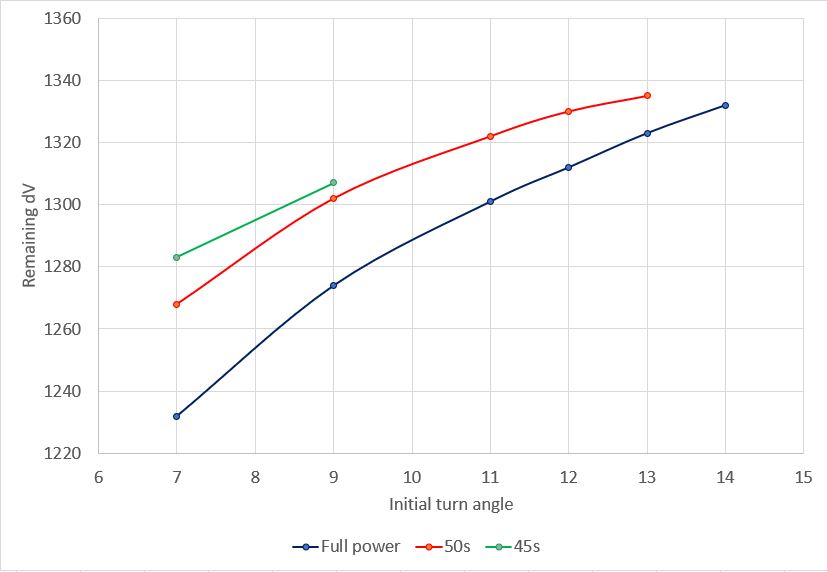 My big takeaway from this is that throttling back achieves the same orbital dV as a much more aggressive turn angle, so can be used to give a safety factor.

It's also interesting that it seemed to spend a lot of time at at TWR of about 1.4-1.5, suggesting that could be a sensible design TWR for a second stage, when the first stage has enough power to get the Ap far enough ahead.

Now I just need to come up with a way of estimating a sensible initial turn angle, but initially I think I'm just going to launch everything at 10 degrees as a reasonable compromise.

29 answers to this question