Safely remove vessel from save file to add them at a later point? 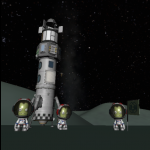 By luizsilveira,
January 1, 2020 in Add-on Discussions