I have just returned to KSP after a year playing Stellaris, and have decided to pick up where I left off. I am trying to design am amphibious mobile base to send to Eve, so I can explore her oceans. I have experience with amphibious mobile bases sent to Laythe, but in those I used unpowered landing gear and relied on jet engines for motion on land and sea. Obviously I need to use an electrical engine for propulsion on Eve's seas, but for motion on land I would like us powered wheels: specifically the TR-2L wheels as they work rather well on Eve (even without cheating). Now to make this base more streamline in the seas, I would like to have them retracted or otherwise moved up out of the "water". My current plan, actually the thing I was working on before I tried Stellaris, is to have the wheels attached to the end of XL girder segments which are in turn attached to G-11 Hinges. When floating, the wheels swing up at least 150 degrees and are out of the "water" and the more streamlined boat base can cruise happily along. But predictably, I have run into my old nemesis, the KSP Shimmy, which I really hoped would have been solved by now. Attached are screen shots of what the current prototype looks like. 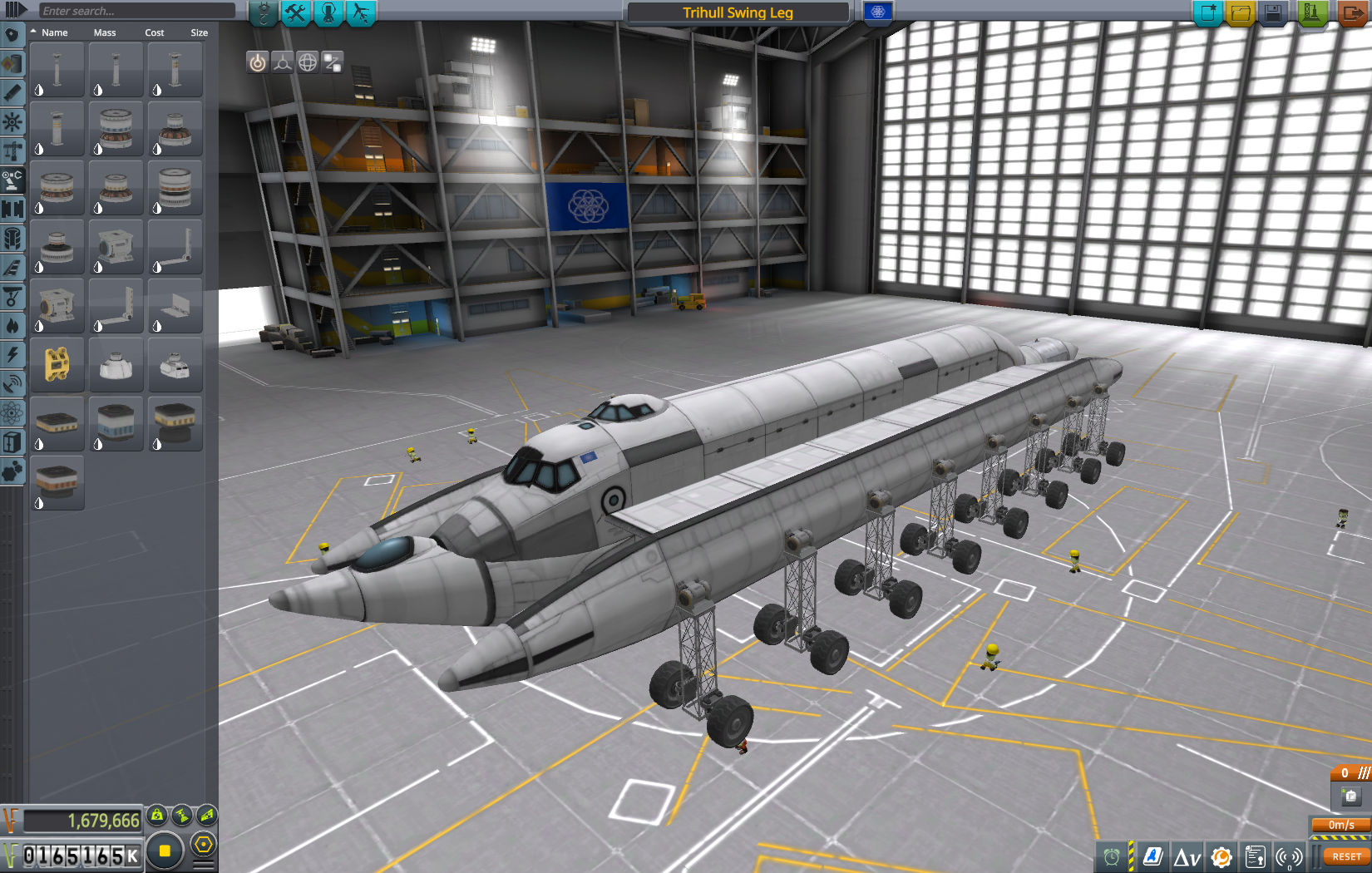 This design was based on an idea I had while growing bored with a game of Stellaris. In Stellaris, after year 2380 the AI players kind of crap out and the human player will most likely win as long as you control at least 1/8th of the galaxy and have a few subject civilizations. Anyway I remembered what I was working on in KSP when I switched, and realized there was no way the very wide twin hull pontoon style boat would fit in a fairing or behind a heat shield, meaning actually getting it through Eve's atmosphere would be difficult. I could do it, but it would be a lot of work. So I decided to see if a single hull, basically just the center portion of this design, would be stable in the water, and it isn't: It rolls over on its side immediately. So I added the outrigger hulls to stop it from rolling over and to mount the wheel levers eventually, and it now floats great. Actually early tests that used the turbofan engines and just ditched the wheels in the water proved this to be my fastest boat base design yet. Obviously the final version will need more wheels than this to support this thing on Eve.

In this boat base, all parts are rigidly connected, but only about 15 are autostructed to the heaviest part, which is one of the tanks in the lower half of the main hull. So I don't think over autostructing is the problem. And one possible clue is that in the aforementioned easier testing where I just detached the wheels after it drove into the sea, I had the shimmy occur when the wheel mount girders were mounted on the sides of the outriggers, but not when they were mounted on the smaller girders attached to the bottom of the outriggers.

So here is the question: How do I eliminate the shimmy with my wheels mounted like this? Or if I can't, does anyone have other suggestions for retracting powered wheels out of the water on an amphibious boat?