Returning directly to the KSC from an inclined orbit? 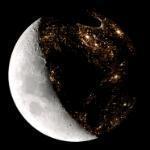 This one has been nagging me for a while thanks to the STS challenge. In order to get the best rank, you need to land your shuttle back at the KSC (or other runway structure on Kerbin). When you're tooling around in an equatorial orbit, this is easy enough, since you're always more or less aligned with the position of the KSC. But when you get into the more advanced missions, you need to perform activities out-of-plane and still return to the KSC; I've been solving this by simply doing a plane change burn, but that'll be less viable as I head out to the Mun and beyond.