Were (, are, will be) the Vault-Tec vaults actually a starship prototype? Is it a part of official lore or a fan speculation? 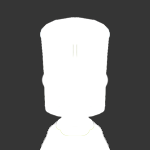 By kerbiloid,
April 4 in The Lounge