Is there a way to land stages in Real-time without the other one reentering and burning up? 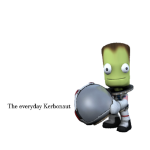 By The Everyday Kerbonaut,
April 13, 2021 in Add-on Discussions