A question for all. Did you ever land on an another planet, and return to kerbin safely? 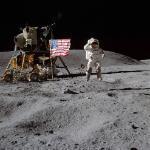 By yoarebignoob,
May 19 in KSP Discussion