What causes the tiny inefficiency across a porkchop transfer map? 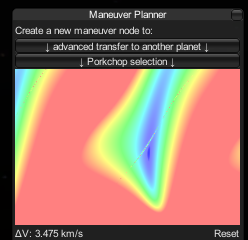