How do I correctly land on the mun? 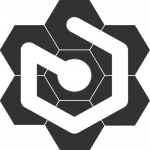 Whenever I try to land on the mun, I end up just increasing my orbit until I'm out of fuel and I crash.